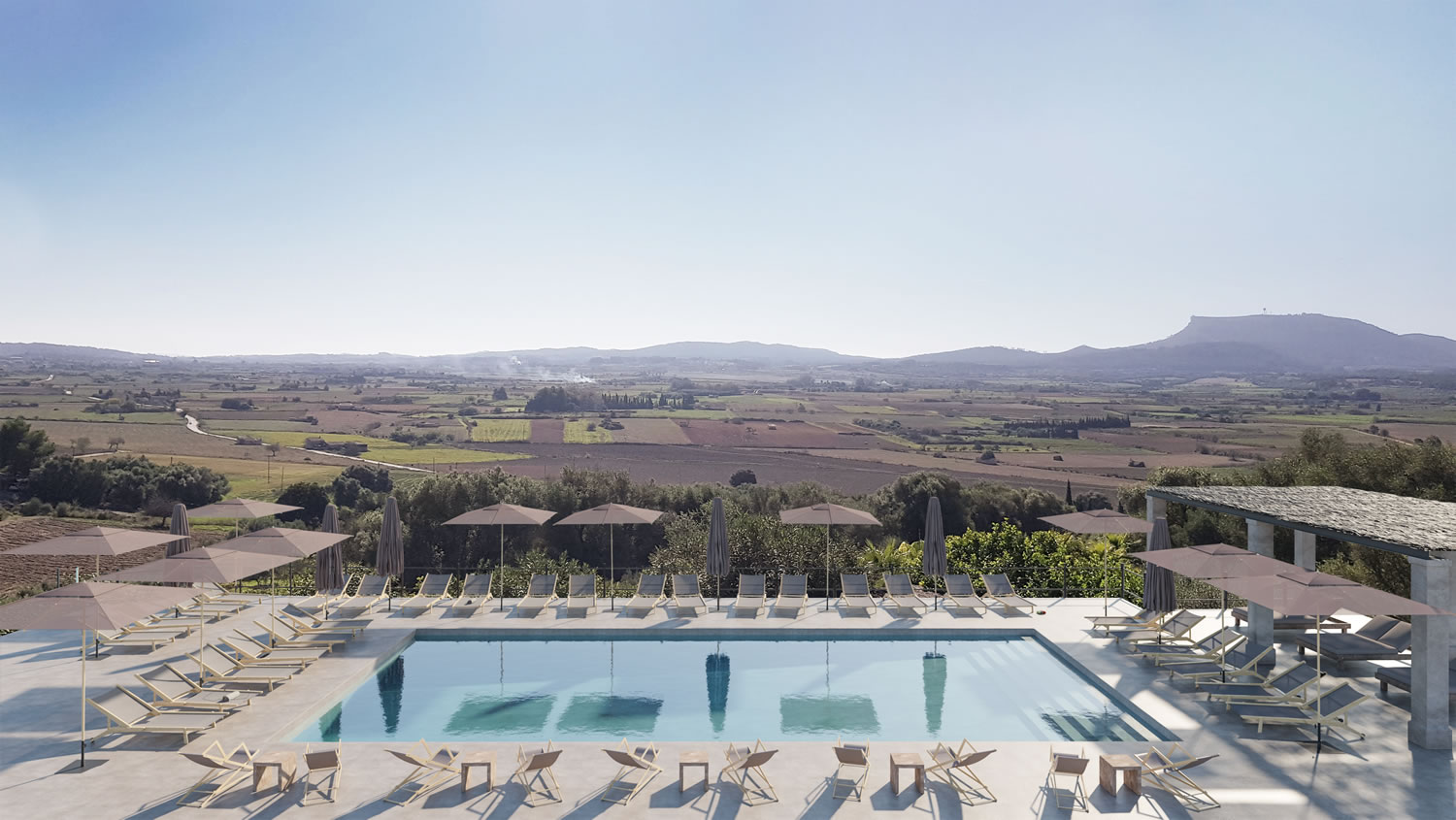 UPDATE !!! The 2020 list has now been published.  Read about 25 exciting new hotels with pool here.

Here it is, my annual list of new boutique hotels openings in 2019.  As usual, I only list small hotels with a true sense of charm (well as much as I can see from plans and photos as many of them are not finished), in Europe and with a swimming pool.

I have though compiled a list of other new boutique hotels opening in 2019 in Europe that don’t have a pool.  If you are interested, make sure to enter your name and email in the box below and it’ll be on your way in no time.

Before you go on to view the new ones for 2019, how about reviewing. Then don’t forget to come back here!

The Château du Grand-Lucé is a French national treasure, located in the Loire Valley, a 55 minute train ride from Paris.  Acquired by an American lady, it’s now been transformed into a classic French luxury hotel with prices to match! There will be a small round pool in the beautiful French gardens.

Five minutes from the Place de Lices, towards the Salins headland, the Hotel Lou Pinet has been operating since the 60s. It’s been taken over by the Pariente family in 2017  completely transforming it for the 2019 season.  Each room will have a private garden with an outdoor lounge. Five stars service is expected everywhere, including in the spa at the bottom of the garden with two treatment rooms (one twin), a steam room and a gym with panoramic skylights.

The Mildiss project in Besse (Puy-de-Dôme) will offer 32 rooms, a restaurant, meeting and seminar rooms, a terrace and a spa with Jacuzzi outside and inside. They promise a vast spa and some fresh design for a mountain retreat.

A new luxury hideaway high up in the mountains in the nearly abandoned hamlet of Valloire at 1800 metres. It will consist of a few rooms, a table d’hôte and a spa.

By the same group as Lou Pinet, le Coucou is a new luxury hotel with spa in the mountains. Le Coucou is in one of the loveliest sites in Méribel, next to the slopes. The hotel rubs shoulders with the snow-capped summits and overlooks the entire valley. It contains 55 rooms, including 39 suites, two private chalets, directly accessible ski-in ski-out slopes, two restaurants, one spa, one Baby Club and one Teen Club, one indoor and one outdoor pool…

Surrounded by the Vecchio river and its crystal-clear water, E Caselle was originally designed by Corsican Architect Pierre Puccinelli at the end of the 60’s.  The heirs of the first hotel owner, the Pagni family, have now started a complete transformation. The hotel will, interestingly, have a kids bar! The spa will be a partnership with Nuxe Spa Paris and will make this an attractive hotel with indoor swimming pool.

The former Hotel Imperator has been purchased by Maison Albar and redesigned by Atelier Cos, a design architect already in charge of the Céline hotel. There will be 50 rooms, plus villas, a Cinq Mondes spa and three dining outlets.

JK Place is famous for its Italian grand hotels. They will open their first venture out of Italy in Paris in what used to be the European Consulate.  The spa by Sisley will have an indoor pool, continuing on the trend for more Paris hotels with pools.

While ‘France’s highest hotel’ won’t fully open until next December, the former cable-car station’s Savoyard restaurant, 24-person penthouse apartment and 14-person dormitory will debut this season on an exclusive-use basis.  Two more apartments and 18 bedrooms will follow next December, plus a spa and a pool.

New hotels with a pool in Portugal

The trend for vineyard hotels continue with this new establishment. The concept of lifestyle and leisure dominates the project, which seats nicely in Alentejo.  L’and of Alandroal will offer a gourmet wine cellar, Spa with indoor pool and swimming pool outdoor, treatment rooms, Jacuzzi, gymnasium, Turkish bath and sauna.

New hotels with pools in Spain

We have been following the Domaines de Fontenille for a while.  From spotting their first opening in Provence, to reviewing it not long after to having conversation with them about the newly opened Les Hortensias in Hossegor where my brother lives.

They now have opened two fincas on more than 300 ha of land: Santa Ponsa and Torre Vella.  Both fincas are true to the local architecture and style of white walls with terracotta.  You can read more in my post about new Menorca hotels

From a traditional 19th century finca, interior designer Dorothée Meilichzon has created a unique décor with graphic lines and figures reminiscent of Chagall. Terracotta headboards, golden rattan seating, green accents reminisce of the colors of the island. There are also 9 private villas for the extended group of families or friends.

You can read more in my post about new Menorca hotels.

After hotels in Greece and Crete, Casa Cook will open its first outpost in Ibiza. I couldn’t find any more details so it might be that this hotel is catering more to adult than families. Keep an eye on their website to see.

So many new hotels opening in Mallorca, it’s difficult to keep track.  Here is another one to be revealed in January. It’s set in an old building with private gardens in Palma’s Old Quarter. Decor will be opulent with velvet fabrics, grand beds and freestanding baths.  The spa and its pool will be in the garden.

In the center of Mallorca, this new luxury hotel is set in 40 hectares of wonderful nature, olive trees, plants, etc.. There will be an indoor pool, a spa and an outdoor pool as well.

New hotels with pools in Greece

I already talked about it before but worth reminding you that it will open around  summer 2019. It has a bespoke kids concept, with families put at the heart of a Casa Cook experience for the first time. Lots of pools: a main pool, a kids’pool and individual plunge pool for some rooms.

Tucked away behind Papas Beach, one of Ios’s most beautiful spots, Calilo will be a new five star beach hotel with pool. All 30 rooms will have private pools and hot tubs. The accent is on barefoot luxury, with three restaurants, a library lounge and beachfront bar, spa and organic garden.

And continuing their expansion in Europe, they are developing a new one in Greece. This new beach hotel with pool will sit nicely in a stunning 65-hectare beachfront site on the west side of the Kea island of the Cyclades.

New hotels with indoor pools in the UK

Just off the Norfolk coast in the village of Langham, this new hotel will embrace the modern and scandi look: warm oak floors, fluffy rugs, four poster beds of the modern variety. And big, high-spec bathrooms perfect for pampering. The spa will have an inviting pool, a steam room and sauna, and a jacuzzi for good measure.

I had already mentioned the Langley in my list of new hotels for 2018.  Hopefully 2019 will be the right date! This new country hotel is divided between the main house and The Brew House, a Grade II listed 18th century outbuilding. The Langley Spa will feature an indoor and outdoor pool, thermal area and five expansive treatment rooms.

Located next to Fountains Abbey in Yorkshire, a UNESCO World Heritage Site, this country estate built in 1680 is surrounded by a beautiful landscaped park. It will house a spa, pool, snow room and forty-seven rooms with sumptuous bathrooms. It’s the first time that a hotel joins Relais & Chateaux before it even opens.

Surrounded by ancient olive groves, the renovated 16th century masseria will be decorated by the owner of our favourite hotel in the UK, Olga Polizzi so it should be just beautiful and welcoming at the same time. There will be a rooftop bar and elegant restaurant overlooking the swimming pool. The resort also features a 9-hole executive golf course, a private beach club and an indulgent spa.

Guests will be able to ski down the zigzagging roof of this hotel by Danish practice Bjarke Ingels Group and onto the slopes of the Vallée de Joux in western Switzerland. Audemars Piguet Hôtel des Horlogers, belongs to Swiss watch maker Audemars Piguet and will stand besides its workshop in the village of Le Brassus. The 7,000-square-metre luxury hotel will have 50 rooms and a spa.

New hotels with pool in Montenegro

We loved our stay at One&Only Le Saint Geran in Mauritius earlier in 2018. Despite being a resort, so unusual for us, the decor and attention were worthy a boutique hotel so I’m interested to read more about the first of their European outposts. It will be in Montenegro and have an Espace Chenot Spa, kids’/teens’ clubs and two separate beach clubs.

Bratsera Hotel review – a relaxing halt in a car-free island

Casas Caiadas in Arraiolos, Portugal – add it to your summer shortlist

Casa No Tempo combines pure design with a love for nature

Casa Santa Teresa, a villa with pool on the beach in Corsica

This site uses Akismet to reduce spam. Learn how your comment data is processed.

You can find out more about which cookies we are using or switch them off in settings.

This website uses cookies so that we can provide you with the best user experience possible. Cookie information is stored in your browser and performs functions such as recognising you when you return to our website and helping our team to understand which sections of the website you find most interesting and useful.

You can adjust all of your cookie settings by navigating the tabs on the left hand side.

Strictly Necessary Cookie should be enabled at all times so that we can save your preferences for cookie settings.

If you disable this cookie, we will not be able to save your preferences. This means that every time you visit this website you will need to enable or disable cookies again.